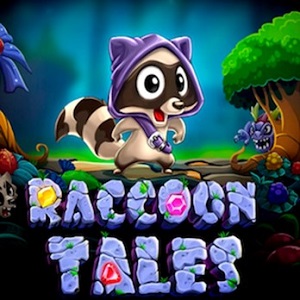 What do you get when you combine an adorable, battle hungry critter with classic pokie action? Raccoon Tales, of course, the impressive new creation from Evoplay Entertainment. Even a quick glance reveals that this isn’t any ordinary pokie, with the top half of the screen occupied by an animated, adventuring critter. During gameplay the raccoon will engage in battles with trolls, goblins and other monsters. But how well he does, of course, is based entirely on the player’s luck.

Below the battle screen is the 7 reels, and 7 rows, combined with a cluster pays matching system. This means that jewels fall from the top of the grid and match, with at least 5 in a cluster counting as a win. Matched jewels explode, allowing new jewels to fall in and occupy the empty space.

The question is; how does battling monsters work in conjunction with pokie play?

Evoplay Entertainment have truly taken things to the next level with Raccoon Tales. The line between video game and pokie is now thinner than ever before, with the game being nothing short of a flawless combination.

For each spin taken the raccoon scampers along to a new area. In each new area there may be a monster, a treasure, or a special event. A treasure will automatically be collected, and passed on to the player, adding a bonus, or even a collectable Scatter Key.

If a monster is faced the chance of the critter winning can be increased, depending on if a win is achieved with that particular spin. Combination wins, of course, dramatically improve the chance of the monster being defeated

If the battle is won, a beneficial modifier is added to a winning spin, allowing the player to share in the glory.

In Racoon Tales dragons act as mighty bosses. But, dragons will not emerge from their caves unless a Bonus round is unlocked. This can be done, naturally, by collecting enough keys.

During a boss battle massive payouts are achievable, with special features unlocked the angrier a dragon becomes. Which is to say; the longer the battle lasts, the more chance the player has of earning big payouts.

Ivan Kravchuk, CEO at Evoplay Entertainment, commented on the launch of the pokie. He declared that Raccoon Tales is a multi-layered, thrilling experience that truly takes players on an adventure. He said simply that those who are brave enough can join the raccoon on the journey, and potentially earn a great deal of payouts along the way.